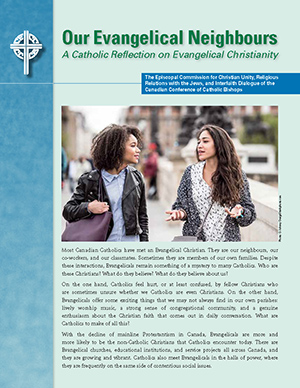 The resource was developed in collaboration with the Evangelical Fellowship of Canada, which has been involved in a formal dialogue with the Canadian Conference of Catholic Bishops since 2011. The resource is well suited for use in high schools and as a parish study guide.

In a letter to the CCCB, Mr. Bruce Clemenger, the president of the EFC, states that the new resource Our Evangelical Neighbours “offers a clear overview of Evangelical beliefs and practices; I believe that most Evangelicals in Canada would find themselves fairly represented in its pages.”

Another resource from this dialogue, called Our Roman Catholic Neighbours, was published in 2019.