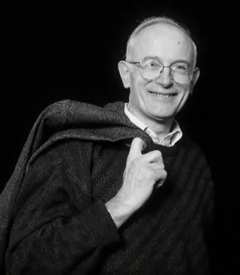 George Vandervelde (ThD Vrije Universiteit) taught systematic theology at the Institute for Christian Studies in Toronto from 1977 until 2005, specializing in soteriology, pneumatology, and ecclesiology. As a Reformed theologian, he wrote a doctoral dissertation on Roman Catholic theology entitled Original Sin: Two Major Trends in Contemporary Roman Catholic Reinterpretation (University Press of America 1981). From his location as a leader in the Christian Reformed Church of North America, he dedicated his life to research and study about the unity of the church, as well as on the subject of indigenous spirituality.

Dr. Vandervelde held many positions on ecumenical committees. He served on the Canadian Council of Churches Faith and Witness Commission as well as the U.S. National Council of Churches’ Faith and Order Commission. He was a leader in the development of the Global Christian Forum in the early 2000s. He was co-chair of the World Evangelical Alliance—Roman Catholic International Consultation, which produced the report Church, Evangelization and the Bonds of Koinonia (2003). He represented the Canadian Council of Churches as an observer at the 1998 Synod of Bishops in Rome, urging those gathered to work towards greater unity, calling the brokenness of the church “a prolonged, festering wound in the side of Christ.” He was pleased to have a private dinner at that time with Pope John Paul II, and there is a photo that marks the event in which he is shaking the pope’s hand. 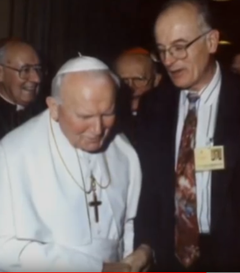 Pope John Paul II and Dr. George Vandervelde at the 1998 Synod of Bishops

In a dialogue between his denomination, the Christian Reformed Church in North America, and North American Catholic Bishops, Vandervelde was key in acknowledging that the Heidelberg Catechism (Q. and A. #80), a central confessional standard, was inaccurate in its critique of the Catholic Mass. He was also instrumental in the development of a Contemporary Testimony for his denomination, entitled Our World Belongs to God (1988).

Vandervelde said of his own work, which was at the nexus of theology and philosophy: “I have gradually moved into issues of ecclesiology, gospel and culture, and ecumenism as my areas of concentration. I think this is related to never having quite left behind the fork in the road between academic theology and engagement in the mission of the church.”

One of his students, Danny Swick said of his teacher: “George Vandervelde’s insight into ecumenism, formed largely through his own ecumenical activity, may be his most valuable attribute as a teacher… it is the way his passion for the unity of the church shapes his erudition that makes him a great teacher.”

His friend and colleague Al Wolters said of him: “He was an ecumenist in the best sense of the word: passionate for Christian unity, but also aware of the significance of long-standing theological differences and the importance of dealing with them winsomely and at a foundation level… he enhanced the prestige and respect of the ICS and the various Reformed and evangelical bodies he represented in ecumenical dialogue.”

Dr. Vandervelde lived in Willowdale, in the north end of Toronto, Ontario, with his wife Beatrice and three sons. He died in 2007 after a short battle with cancer. A festschrift in tribute to him was published in 2006 entitled That the World May Believe: Essays in Honour of George Vandervelde edited by Michael Goheen and Margaret O’Gara (University Press of America). Dr. O’Gara wrote that she considered George a colleague and a friend, extrapolating on the importance of friendship to ecumenism. She maintained that George reminded her that “one gift ecumenical partners offer each other in the gift exchange is serious criticism. Such criticism can be heard because of the basic mutual recognition present between dialogue partners… Ecumenists who experience this [friendship in Christ] have been made ready for the demands of dialogue.”